Celebrating 7 Years on the Web!

The wiki about Virginia C. Andrews and the number of books that she has written along with her ghost writer Andrew Neiderman, the man who kept us reading, long after her death. We are currently in need of people to help us edit, you can start editing now, anyone can edit. This Wiki has 286 articles since December 2008

"Daphne would bust a gut if she could see how well you have done for yourself, sister dear."
―Gisselle Dumas to Ruby Landry[src]

08/05/2012 Hello everyone, it seems a lot was done while I was gone, and I appreciate you all for taking time to edit the wiki, i must ask that when you create new pages, please categorize them down at the bottom, and use categories that have already been filled out. I normally don't care what anyone does, but I can't get this wiki to be spotlighted unless all pages are categorized and there are no stub articles. Also if you would like to apply to become a moderator or site admin to this wiki please send me a message on my talk page? And expect an update to this wiki either this week or next week. Thank you for all your hard work!

12/118/11 Hi all, just wanted to let you know I did a massive amount of updating to the site and fixing broken links and infoboxes as well as character pages that had wrong infoboxes, mispelling, and no categories. Please remember to add categories and use the Template:Character, which is the new infobox we will be using from now on for all character pages, i will create a special one for the family infoboxes and place infoboxes. Keep up the good work everyone, Merry Christmas and Happy Holidays! :)

4/6/11 Hello V.C. Andrews fans, Quillsorceress here, I've been out of the game for a while now, but I'm back now and sill gearing to update the wiki, as for quotes of the month its becoming more difficult to have to keep posting quotes each month, so i'm just gonna post quotes whenever and categorize them under which year I posted them. As for images I will keep updating those when I can and please feel free to upload and add featured images or quotes, your contributions to this wiki are greatly appreciated, thank you. According to the Complete V.C. Andrews website there's a new series out now, which I totally didn't know, its called the Storms Series or Storms, and it looks like it's going to be a two book series, I kinda miss the old 5 books series, but its ok, I can handle reading only 2 books. The first book Family Storms is out now I guess it was released in February 2011 and the second book Cloudburst is going to be released November 2011, you can purchase them wherever books are sold, I know I'm gonna walk down to Wal-Mart to get my copy. As for Daughter of Darkness, I heard the book got negative feedback so i'm assuming along with the Complete V.C. Andrews site that that book is not going to have a sequel. The Landry that was supposed to be coming to Lifetime, I guess is here say, I'll let you know or others will when we hear more.

11/2/10 We have a new theme up, it was changed to adapt to Wikia's new layout, hope you like it and had a good halloween. As you can see a new monthly quote has yet to be put up, one will be added later. Daughter of Darkness is already out, fans maybe now purchase it wherever books are sold.

08/31/10 According to our source the Complete V.C. Andrews website, Daughter of Darkness is scheduled for release on October 26, 2010 in mass paperback form. Also there are rumors of a Flowers In The Attic film remake, more will be posted in the days to come.

05/19/10 We have word on a new book coming soon by V.C. Andrews, it's called Daughter of Darkness and it features the supernatural. No word on whether or not it is part of a series or a stand alone novel like My Sweet Audrina. More news on this new book will be posted as soon as more facts are gathered.

According to our source The complete V.C. Andrews website, the word "The" in Heavenstone Secrets has been taken out by Simon & Schuster, now the book series will just be called Heavenstone Secrets. Please check back again for more updates.

The Peter Griffin screen cap has been removed due to taking up alot of space in the news section and so has the Flowers in the Attic DVD scans, from now on only current news posts will be put here. Accoriding to the Complete V.C. Andrews website, readers can now see what the cover looks like to the next V.C. Andrews novel, called Heavenstone Secrets, part of an all new 6 part book series. The new image can be found here.

In the mid 1970's after Laura Sue's marriage to William Cutler's son Randolph, William raped Laura Sue which resulted in Dawn/ Eugenia, because William's wife Lillian Cutler felt threatened by Laura Sue as well as outraged by this affair, she arranged for the infant Dawn to be kidnapped by the Longchamp Family. Ormand Longchamp and his wife were working in Cutler's Cove at the time, when Lillian discovered Sally Jean had recently given birth to a stillborn daughter and already had a three year old son named James, so Lillian somehow convinced Ormand and Sally to take Laura Sue's unborn child once it was born. After Laura Sue gave birth to a girl, the baby was quickly taken away from Laura Sue without her getting to hold her baby girl (see Pg. 145 Twilight's Child); Lillian named her Eugenia Grace Cutler, after her dead sister Eugenia Booth. Less than a few days after Eugenia's birth, Lillian arranged for her house keeper and granddaughter's nurse to leave the room and come back looking scarce as soon as Oramand kidnapped baby Eugenia. The kidnapping was a success, and just before Sally and Ormand left Cutler's Cove, Lillian inadvertently gave Sally Laura Sue's pearl's a a keepsake for Eugenia. Sally and Ormand's escape was covered by Lillian, who threw the police off their trail. Was given the name Dawn Longchamp by Sally who said she named her after the Dawn sky right after she gave birth to her in the back of a pickup truck which would by the first of many lies (See Pg. 1, of More...).

Here is a list of similarities from the different series of books that were written by V.C. Andrews, for more comparisons (click here).

Glady's Tate fakes a pregnancy, when her husband Octavius rapes and gets Gabrielle Landry pregnant with Paul. - The Landry Series.

Georgia Booth fakes her pregnancy when her husband Jed Booth rapes and gets their niece Lillian pregnant with Charlotte. - The Cutler Series

Kirby Scott rapes Grace Houston and gets her pregnant with Linden, Jackie Lee is forced to fake a pregnancy and pass Linden off as her own. - The DeBeers Series

Philip Cutler lusts for his half sister Dawn Longchamp and has either tried or successfully raped her many times. - The Cutler Series.

Grandmother Cutler hates all her grandchildren including their mother Laura Sue, she treats her granddaughter Dawn the worst out of everyone, - The Cutler Series.

Olivia Foxworth, locks all four of her grandchildren up in the westwing of Foxworth Hall. Olivia looks at Chris, Cathy, Cory and Carrie Foxworth with disgust and states they are all sinners from hell and that she can't ever love them. - The Dollangagner Series

Please help us to improve this wiki, your knowledge of any V.C. Andrews books would greatly benefit her fan everywhere. To start simply type in a character, film, book or person related to the V.C. Andrews novels. Thank you for your participation! 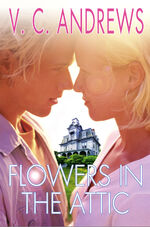 February 28, 2012 / Into the Darkness
IS NOW AVAILABLE ALONG WITH Cloudburst!!!

December 24, 2011 / Cloudburst
IS NOW AVAILABLE ALONG WITH Family Storms!!!

April 6th, 2011 / Family Storms
IS NOW AVAILABLE ALONG WITH Daughter of Darkness!!!

Retrieved from "https://vcandrews.fandom.com/wiki/V.C._Andrews_Wiki?oldid=8047"
Community content is available under CC-BY-SA unless otherwise noted.